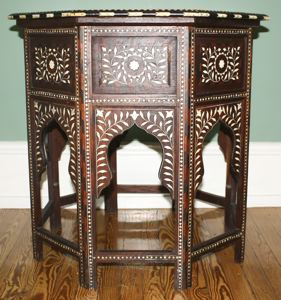 Bryn Mawr College
Accession Number: Deanery.405
Other Number(s): W.172 (Wyndham No.)
Classification: Furnishings and Furniture; Furniture; Table
Collection: Deanery Collection
Description: Small octagonal table (tabouret) with elaborate inlaid designs. The side panels consist of a smaller rectangular area on the upper third and a longer rectangular area with curvilinear arch cutout on the bottom section. The entire panel is outlined in an inlaid band of repeating diamonds. In between each panel is another inlaid band of alternating dark and light wood. The upper rectangle contains a rectangular band of the alternating dark and light wood and a circular vegetal design around a floral center. The spandrels of the arch in the lower section have a vegetal design.

The elaborate vegetal inlay and curvilinear arches can be attributed to the increased influence of Indian aesthetics at the time. American art inspired by Indian designs increased over the course of the late-18th and early 19th centuries. Since the early 1600s, one can trace the history of British trade with India. In 1757, however, the British East India Company effectively controlled India after the Battle of Plassey; after the Indian Rebellion in 1857, the British government began direct rule over India in 1858. The visibility of Indian art and design to American audiences increased alongside British control over the peninsula through the display and distribution of Indian works, such as in the Great Exhibition of 1851 in London. The Deanery at Bryn Mawr College prominently featured Indian art as it was largely decorated by the American artist, Lockwood de Forest (1850-1932), who is best known for his role in the introduction of Indian art to America and Britain.

Keywords Click a term to view the records with the same keyword
This object has the following keywords:
bone*, inlay*, ivory*, tabourets*, wood*
Additional Images Click an image to view a larger version

Deanery.405_BMC_f_2.jpg
Related Publications Click for more information
Bibliography List
The following Bibliography exist for this object:
Portfolio List Click a portfolio name to view all the objects in that portfolio
This object is a member of the following portfolios:

Your current search criteria is: Keyword is "BHGXZ" and [Object]Country of Creation is ".