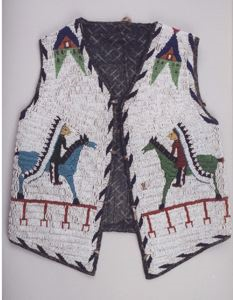 Classification: Clothing and Adornments; Clothing
Culture/Nationality: Sioux, Plains Indians, Native American
Collection: Twyeffort Collection
Description: Native Americans began to use traditional bead and quill embellishment on European-style vests starting in the 1890s. Beadwork and quillwork were primarily practiced by women for creative outlets and as an indication of industriousness. The colors and symbols could express important experiences or lore and particular patterns could identify tribes, families, or individuals. The gift of an intricately decorated vest like this one would be a meaningful expression of a mother's love and heritage to her child.

Your current search criteria is: Keyword is "BHLUL" and [Object]Culture-Nationality is "Sioux, Plains Indians, Native American".