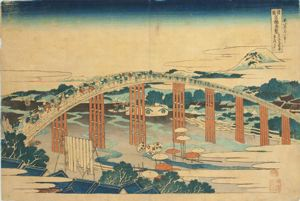 Yahagi Bridge at Okazaki on the TÃ´kaidÃ´ Road (TÃ´kaidÃ´ Okazaki Yahagi no hashi), from the series Remarkable Views of Bridges in Various Provinces (Shokoku meikyÃ´ kiran)

Your current search criteria is: Keyword is "BIPFW" and [Object]Country of Creation is "Japan".