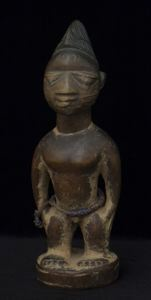 Nigeria has the highest incidence of twin births of any country in the world. Among the Yoruba, twins are regarded as blessed spiritual beings who bring wealth to their families. When a twin passes away, the parents consult a babalawo (priest or diviner), who will advise the family to have an ere ibeji, or twin figure, carved to represent the gender of the deceased twin and become the residence of the twinâs spirit.

Your current search criteria is: Keyword is "BKLJG".