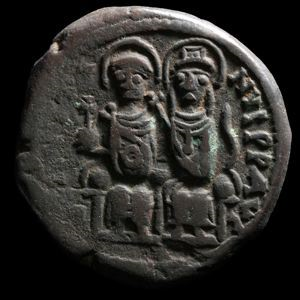 Byzantine Follis of Nicomedia Issued by Justin II and Sophia

Keywords Click a term to view the records with the same keyword
This object has the following keywords:
bronze*, Byzantine*, folles*, scepters*, thrones*
Additional Images Click an image to view a larger version

C.1014_BMC_r_2.jpg
For RTI files of this object please contact artandartifacts@brynmawr.edu
Exhibition List
This object was included in the following exhibitions:
Portfolio List Click a portfolio name to view all the objects in that portfolio
This object is a member of the following portfolios:

Your current search criteria is: Keyword is "BNPDC" and [Object]Century is "6th century".