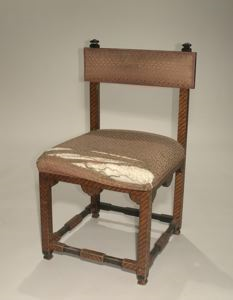 This side chair can be seen in a 1904 photograph of the Deanery, located in a hallway between M. Carey Thomasâs study (an early version of the Blue Room, designed by de Forest in 1896) and her friend Mamie Gwinnâs small study. After the Deanery was renovated and expanded in 1908-1909, the chair was moved to Thomasâs large sitting room, known as the Dorothy Vernon Room. The room was modeled after one in Haddon Hall, Derbyshire, England, which Thomas had visited numerous times while she was a student, traveling in Europe. De Forest designed the room as a mixture of English and East Indian design, although Japanese teakwood tables and Tiffany lamps were used in the room as well. After the Deanery was razed in 1968, a new Dorothy Vernon Room was installed in Haffner Hall, about a quarter size of the original room, where many of the ceiling stencils, furniture, and other furnishings were re-located.

On Loan to the Philadelphia Museum of Art

Keywords Click a term to view the records with the same keyword
This object has the following keywords:
art furniture*, carvings*, side chairs*, upholstery*, wood*
Additional Images Click an image to view a larger version

Deanery.260_BMC_f.jpg
Related Publications Click for more information
Bibliography List
The following Bibliography exist for this object:
Portfolio List Click a portfolio name to view all the objects in that portfolio
This object is a member of the following portfolios:

Your current search criteria is: Keyword is "BOCCR".