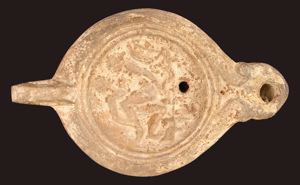 Classification: Furnishings and Furniture; Lighting Devices
Culture/Nationality: Roman
Keywords Click a term to view the records with the same keyword
This object has the following keywords:
lamps*, Roman*, terracotta*
Additional Images Click an image to view a larger version

L.27_BMC_t_3.jpg
For RTI files of this object please contact artandartifacts@brynmawr.edu
Exhibition List
This object was included in the following exhibitions:
Portfolio List Click a portfolio name to view all the objects in that portfolio
This object is a member of the following portfolios:

Your current search criteria is: Keyword is "BODKH" and [Object]WEB Custodian Inst is "Bryn Mawr College".