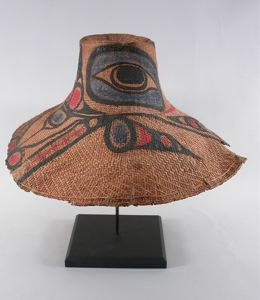 Classification: Clothing and Adornments; Clothing; Headwear
Culture/Nationality: Tlingit, Native American
Collection: George and Anne Vaux Collection
Description: This twined hat, with painted decoration made of vegetable dyes, may be a ritual hat that was treasured as an heirloom and worn for special celebrations. This hat depicts a stylized image of Raven, a supernatural trickster, who aided humans at the time of the mythological flood and remains central to the Tlingit belief system.