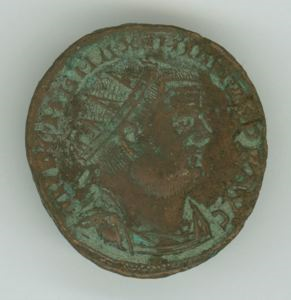 Classification: Exchange Media; Coins
Culture/Nationality: Roman
Collection: Lily Ross Taylor Collection
Findspot: Was listed as from Alexandria, Italy. While there is an Alexandria in Italy, it was not a location of a mint; additionally, the coin has ALE in exergue, which indicates the mint at Alexandria, Egypt. The confusion probably arose from the fact that the coin was purchased for the collection in Italy.

Keywords Click a term to view the records with the same keyword
This object has the following keywords:
bronze*, coins*, Gods and Goddesses*, Imperial*, terrestrial globes*
Additional Images Click an image to view a larger version