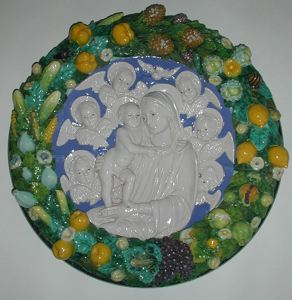 This plaque, which depicts the Virgin Mary and Christ Child, is one of the many works of religious art that were purchased to decorate the Deanery, which together represent many of the major world religions (including Buddhism, Christianity, and Islam). The ceramic plaque is a reproduction of a work by the Italian Renaissance artist Andrea della Robbia (1435-1525). It can be seen in early (ca. 1896) photographs of the Deanery, when it hung in a hallway on the first floor.

Keywords Click a term to view the records with the same keyword
This object has the following keywords:
ceramic*, plaques*, Renaissance*, reproductions*, sculpture*
Additional Images Click an image to view a larger version

Deanery.45_BMC_f.jpg
Bibliography List
The following Bibliography exist for this object:
Portfolio List Click a portfolio name to view all the objects in that portfolio
This object is a member of the following portfolios:

Your current search criteria is: Keyword is "YUBH:YUBI:BGLWX:BGLXB:BGLXF:BGLXR:BGLXX:BGMSZ" and [Object]Display Artist is "Andrea della Robbia".