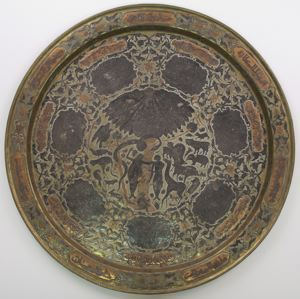 This metal tray is one of the many works of religious art that were purchased to decorate the Deanery, which together represent many of the major world religions (including Buddhism, Christianity, and Islam). The central scene on the tray depicts Adam and Eve, with surrounding inscriptions in Arabic that reference other narratives found in the Abrahamic textual traditions.

Keywords Click a term to view the records with the same keyword
This object has the following keywords:
Arabic numerals*, brass*, copper*, religious art*, silver*, trays*
Additional Images Click an image to view a larger version