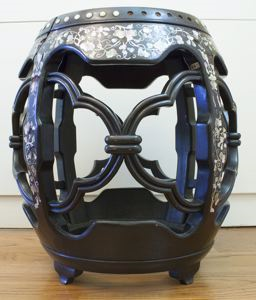 The elaborate vegetal inlay is inspired by Japanese art. Increased interest in and inspiration from Japanese art in the 19th century can be connected with the shift in social, economic, and political relations between America and Japan. From 1633-1853, Japanâs strict isolationist policy limited contact with foreigners. Over the course of 1853-1854, however, an American embassy coerced the Japanese government to adopt a treaty that would open Japan to foreigners. The influx of Japanese goods after the treaty exposed American artists to Japanese art and design. An example of the incorporation of these new artistic influences is the work of the American artist, Lockwood de Forest (1850-1932), at Bryn Mawrâs Deanery. The celebrated Blue Room in particular had gold designs that de Forest stenciled on the ceiling reminiscent of Japanese textiles, and the spiked flowers of the Japanese pagoda tree were the model for the stencil designs on the sofa and daybed.

Your current search criteria is: Keyword is "YUBH:YUBI:BGLWX:BGLXB:BGLXF:BICIF:BICIL:BIEKW:BIFKY:BIFLD:BIFLN:BIFLS:BIIVS".