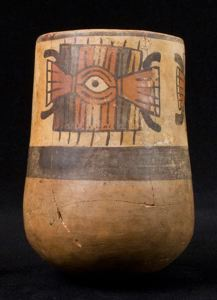 Middle Nasca vase (Phase 5, 325-440 A.D.) painted in the Bizarre style. There was a period of experimentation during Phase 5 when artists abandoned the normal canons of the Nasca style and tried to introduce new ideas. The result was a series of motifs that were put together in strange new ways, much like Picasso did in more recent times. The fad lasted only a short time, but did have the effect of introducing proliferous elements into the more traditional Nasca style which lasted until the end of the sequence. This piece displays an eye drawn over a field of vertical elements. The identity of the subject matter is unknown.

Keywords Click a term to view the records with the same keyword
This object has the following keywords:
eyes*, Nasca*, Peruvian*, vases*
Additional Images Click an image to view a larger version

Your current search criteria is: Keyword is "YUBH:YUBI:BILYI:BNCNN:BRXMN:BRXMR:BRXMZ:BRYIX:BSAKW" and [Object]Country of Creation is "Peru".