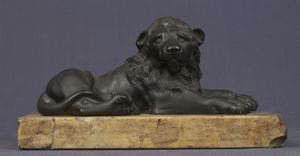 M. Carey Thomas, the first Dean and second President of Bryn Mawr College, lived in the Deanery from 1885 to 1933. She was apparently quite fond of lions, which could be found throughout the house in various forms. This bronze lion is one of a pair of recumbent lion figurines that may have been used as doorstops.

Keywords Click a term to view the records with the same keyword
This object has the following keywords:
Animalia*, bronze*, marble*, sculpture*
Additional Images Click an image to view a larger version

2013.4.13_BMC_r_2.jpg
Exhibition List
This object was included in the following exhibitions:
Bibliography List
The following Bibliography exist for this object:
Related Object(s) Click a record to view

Lioness Doorstop
2013.4.12
Portfolio List Click a portfolio name to view all the objects in that portfolio
This object is a member of the following portfolios: