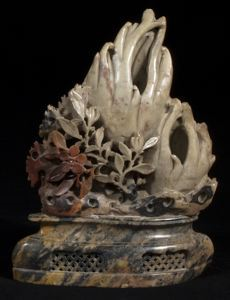 This sculpture is made of soapstone, a form of talc similar to jade but more easily carved. It, along with several other Asian soapstone vases and carvings, decorated first the Dorothy Vernon Room and later the first-floor Lounge in the Deanery. The sculpture has a polished base, on top of which is an intricately worked, pierced floral design.

Keywords Click a term to view the records with the same keyword
This object has the following keywords:
Asian*, Chinese*, sculpture*, soapstone*
Additional Images Click an image to view a larger version

2007.3.13_BMC_f.jpg
Exhibition List
This object was included in the following exhibitions:
Bibliography List
The following Bibliography exist for this object:
Related Object(s) Click a record to view

Your current search criteria is: Keyword is "YUBH:YUBI:BILYI:BUEKM:BUEKQ:BUEKU:BUJCV:BUVSM" and [Object]Country of Creation is "China".