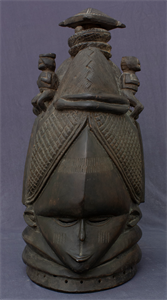 When young girls in parts of the West Atlantic region reach a certain age they are initiated into the Sande womenâs society, whose purpose is to teach girls the roles of proper women within their communities. Once the training is complete, the girls are then considered women and are brought back into the community to be celebrated. A leader of the womenâs society, known as a ndoli jowei, dances in masquerade with this type of helmet mask.

Sande Society helmet masks symbolize an ideal of beauty with their high foreheads, elaborate braided hairstyles, and healthy black complexions. According to oral tradition, the Sande spirit is a water spirit; therefore it is believed that the rings on the neck of the mask symbolize the rippling of water. Among the Temne, the rings of the mask are viewed as the outer shell of a moth undergoing metamorphosis, which represents the girlâs transformation into a mature woman.

Your current search criteria is: Keyword is "YUBH:YUBI:BILYI:BUEKM:BUEKQ:BUEKU:BUJCV:BUVSM" and [Object]Display Artist is "Unknown Mende".