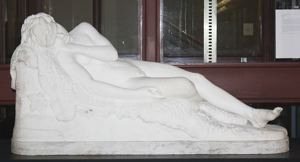 William Henry Rinehart (1825-1874) was an American sculptor and native of Maryland, where he first studied sculpture before moving to Italy in the 1850s. Among his many American patrons were William T. Walters, founder of the Walters Art Museum in Baltimore, and John W. Garrett, the president of the Baltimore and Ohio (B&O) Railroad.

Garrett purchased this life-size marble sculpture in 1874. It is the first marble version of Endymion Recumbent that Rinehart created; three other versions exist. One, in bronze, is mounted on Rinehartâs own tomb in Greenmount Cemetery, Baltimore. A plaster version is located in the Smithsonian American Art Museum in Washington, D.C., and another marble replica is at the Corcoran Gallery of Art, also in Washington, D.C.

The sculpture was brought to Bryn Mawr by Mary Elizabeth Garrett, John Garrettâs daughter, when she moved into the Deanery in 1904. It was originally misattributed to the Danish sculptor Bertel Thorvaldsen (1770-1844) and placed in the Deanery garden, where it remained for many years. Sometime during the Alumnae Association era (1930s to 1960s), the sculpture was removed to the basement, supposedly following an incident in which some gentlemen guests saying at the Deanery - then an inn - decorated Endymion with a moustache, rosy cheeks, and clothing.

Keywords Click a term to view the records with the same keyword
This object has the following keywords:
marble*, outdoor sculpture*, Pan, sculpture*
Additional Images Click an image to view a larger version

2011.4.19_BMC_f_3.jpg
Bibliography List
The following Bibliography exist for this object:
Portfolio List Click a portfolio name to view all the objects in that portfolio
This object is a member of the following portfolios:

Your current search criteria is: Keyword is "YUBH:YUBI:BILYI:BUEKM:BUEKQ:BUEKU:BUJCV:BUVSM:BUWOL:BUWRL".